In the past two weeks at Ingraham High School, every freshman student was given a school-sanctioned laptop to bring between home and school for classwork/homework. Every freshman completed an application form including a twenty-five dollar fee for future possible repairs.

The whole process of getting computers was very quickly hurled at the freshman class. While we may have heard of it earlier in the year as a possibility, it wasn’t solidified for many until we were given forms about a week before getting the laptops. That said, why did freshmen even get laptops? Why freshmen over the other classes? Are freshmen required to have laptops? Do the freshmen want laptops?

The consensus among the freshmen was one of mixed feelings. While many surveyed students said they would support the laptop program, each had some sort of alteration that they would like to see to solidify their position. One explained that it was because “personal laptops should be allowed” or “[the laptops]… shouldn’t be forced, but provided.” Students are required to take a laptop, and required to bring it to school everyday. Teachers explain it’s because “personal laptops could not have some of the programs needed in class” and therefore could hinder that student’s learning.

There was also a fee required when getting a laptop. If you did not bring money or a check with your signed application, it was logged onto your PowerSchool account as a negative. Note that you cannot graduate high school if you have unpaid debts on PowerSchool. Scholarships were an option for students on the free-and-reduced lunch program. For students who already have personal laptops, this fee seems like a waste of money, on top of money already spent on a laptop.

All of this unhackneyed news about laptops seems very random, but Seattle Schools has had this plan in the works for a while. It is officially titled the “Student 1:1 Laptop Program” whose goal was “[to help] unlock the potential of students… through digital access.” It is the phased deployment of laptops to all schools, prioritizing high schools that “are in the most need of technical support.” All Ingraham freshmen over the next four years will get laptops, and when this years’ freshmen become seniors, the laptops are cycled back through. There is no mention nor indication that current sophomores, juniors, or seniors will get laptops.

Freshmen are getting laptops because it would be easiest to begin cycling though laptops with a freshman class, rather than having upperclassmen have laptops and then too many laptops being cycled through. Freshmen are also widely known as “the guinea pigs” of high school, because changing something for them will not deter them too far off their high school path. Since they are the first year, it is easiest to see what the laptop experience will be for all four years of their high school career.

However, laptops can be an easy distraction. Unlike phones, students are expected to have laptops out during class, so they can open anything they want without being too conspicuous. It is difficult for teachers to accuse students of misusing the laptop unless they catch them directly playing a game or being off task; tab switching is fast, so it is easy to pretend to be doing school work. Although the Seattle Schools filter system blocks most of the popular game sites, there are many pirated or “unblocked” game websites that are accessible to students.

Although the current plan with laptops is not perfect through and through, it is ultimately helping students. Those who didn’t have computers at home to type and had to rely on in class work time with computers now have the necessity of being able to work at home.

Ingraham’s quest to get back to district playoffs

The Ingraham boys’ basketball team had a historic season last year, go ing to State competition for the first time in 67 years. Expectations were riding  high coming into this year, with the return of the core players who propelled the  team to State last year: Mitchell Saxen, Coz Collins and Latrell Jones. A few lucky  transfers have also helped make a state title within reach. Of the transfers, junior  guard Charlie Puetz said, “They are a talented group of people for sure.” He was  also unequivocal about the goal for the year. When the team sat down in the locker  room before the season to talk about what they wanted to accomplish, every single  player said a variation of the same thing. State Championship.

The Rams started off this year on the right track, with dominating wins  over Npire and Franklin. The Rams also beat Seattle Prep, now ranked 7th in  the state. This was an especially impressive series of wins considering that St.  Mary’s-commited Mitchell Saxen was out with a back injury. Senior forward  Tyrell Moore, however, stepped up, especially against Prep—scoring 26 points  with five assists. “We shot the ball very well throughout the course of those games,  and we did a solid job defending,” said senior guard Maui Sze on what helped the  Rams to be successful early in the year. The Rams, however, were unable to carry  that momentum into their fourth game of the year, against top-ranked Eastside  Catholic, which turned into a 30-point blowout. The Rams struggled to guard the  elite backcourt combo of 4-star guards Shane Nowell and Nolan Hickman. The  Rams then departed to San Diego to play in the Torrey Pines Holiday Classic. This  showcase brought together some of the top teams in the country, but the Rams  failed to bring their A-game, going 0-4. After falling to a record of 3-5, the Rams  were able to right the ship with wins over Blanchet and Lincoln back in Seattle.  Everything appeared to be going right for the Rams as they started out their game  against Roosevelt with a 16-3 lead. Roosevelt came back and ended up winning in  a stunning upset. Friday 1/17, the Rams tied their record again when they played a  nail-biter as the finale of a quad against West Seattle, emerging victorious in the fi nal thrilling seconds. At the next quad on February 7th, the boys played an equally  tense game against Nathan Hale and again came out on top.

Despite the early season setbacks, the Rams believe they have a good  chance to make some noise in the Tacoma Dome. Puetz said a state title was “definitely” still the goal. The prospects are looking up, with 1st Team All-Metro center,  and reigning Defensive Player of the Year set to come back soon from his back injury. To improve, the Rams need to “Play more team basketball,” Puetz said. ‘We over  me’ is the team motto, and with that mindset, the Rams are ready to get ringed up.

When the United States was founded, the  electoral college was included in the Constitution as a compromise between Congress and voters. Now, frankly, it serves to give rural and (typically) conservative voters a larger say in the  presidential election than their urban counterparts, undermining the idea that every citizen’s vote is equal.

According to the National Archives, the founders added the electoral college into the Constitution “as  a compromise between the election of the President by  a vote in Congress and the election of the President by  a popular vote of qualified citizens.” This was a time in  which the United States was one of the first countries to  formally elect its chief executive, so no true precedents  had been set elsewhere for them to draw upon. The  Three-Fifths method of designating slaves as each worth  ⅗ of a count when determining the voting power based  on population of a state was still in place, and the right  to vote was severely limited; at the time of the country’s  founding, only white, landowning men could vote, and  the first expansion, in 1856, only extended the privilege  to all white men. Furthermore, according to political  science professor George Edwards III, the electoral college was nobody’s first choice; it was a compromise  between factions of delegates, one of the opinions that  Congress should choose, and the other arguing that the  people should. The electoral college thus was created as  a compromise, in a time where giving each American  an equal voice was clearly not an honestly held value.  The electoral college works as a middle-man process  between voters and the election. Each state is given  as many electors as they have representatives in the  house, plus two for their senators. For all but two  states, the winner of the popular vote in each state gets  all of that state’s electors. If a candidate wins 270 of  the 538 total electors, they win the election and be come president of the United States in the following  January. This leads to a situation where the winner of the popular vote (the candidate receiving the most total votes) can lose the election. A candidate becoming  President despite losing the popular vote has happened  five times in American history, most recently with  President Bush in 2000 and President Trump in 2016. California, the most populous state, has 55 electors, whereas Wyoming, for example, has 3. (These figures are  determined by the census, conducted every ten years.) 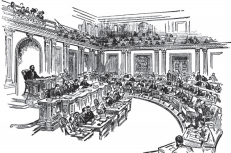 If California, an overwhelmingly urban state, has so many more electors than rural Wyoming, then how can the electoral college favor rural voters? California had a population of 37 million people in 2010 when the last census was counted, and Wyoming had  540,000. This means that in California, each elector represents around 675,000 people and 430,000 eligible voters, whereas an elector in Wyoming rep resents 180,000 people and around 85,000 eligible voters. Comparatively speaking, this means that each Wyoming voter’s choice has about four times the weight of a Californian’s choice. This means  that, throughout the nation, voters living in states with lower populations have a more influential vote. This vote inflation in rural communities is due to the addition of senators into the number of electors. The number of representatives each state has is a direct reflection of its population, but each state gets two senators. Alongside its 53 representatives, the two senators in California increase its voting power by about four percent. In states with one representative, like Wyoming and Alaska, the voting power is tripled. Several states have begun trying to act on their own to combat the unfair effects of the electoral college. In Maine, for example, the four electors are split, rather  than the common winner-takes-all system. This solves the problem that many Republican voters in California  face; no matter who their candidate is, according to recent patterns, their vote likely will not change that all 55 of California’s electors will go to the Democratic nominee. However, Maine’s (and Nebraska’s) solution does not change that smaller states have a disproportionate say.

Another, more direct solution, is the National  Popular Vote Interstate Compact (NPVIC). The NPVIC  is a coalition of states—currently 15 plus the District  of Columbia—that, once they make up the majority of  electors, will ensure the candidate who wins the popular vote will be elected. Currently, the NPVIC holds 196  electors, but pending legislation in several more states  that would bring the total up to 327, more than the 270  needed to ensure a popular vote. It is worth noting that  of the states who have so far joined the coalition, most  are typically blue states, such as New York, California,  Washington, and Illinois, whereas red states like Texas  and Tennessee with high populations have not. This reflects the power the electoral college gives to the conservative base, an advantage they are unwilling to part  with. As long as the system remains intact, each citizen  of the nation will not have an equal voice, and we will  find further situations where the result of the election  is not the will of the people, but the will of states and  voters unwilling to give up their disproportionate influence. If the United States wants to claim that it has  a fair democracy, the electoral college needs to go.